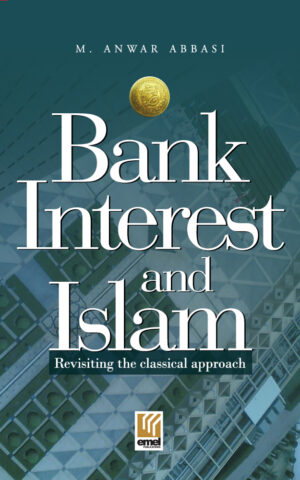 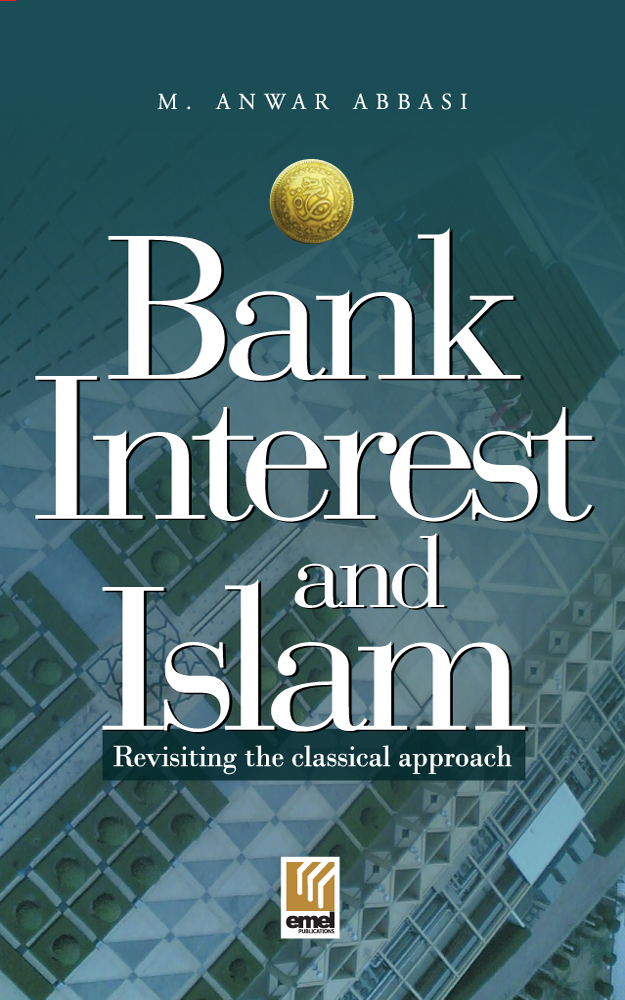 Contrary to these scholars’ reasoning, this book takes a different position basing on the context of Qur’an and reached the conclusion that riba is not mere the excess on any loan, rather it is excess on the loans extended to the destitute and needy persons. Bank’s interest is completely different from the Qur’anic riba which is prohibited. It represents a complete paradigm shift from the orthodox and popular view of bank interest. It establishes why bank interest cannot be categorized under riba, which is fervently outlawed and condemned by the Holy Qur’an.

Besides Islam, Riba is forbidden in every religion and philosophy. That is why the Muslims of all times and ages tried to get rid of this menace. However, the introduction of banking system gave rise to the question about the nature of income from the institution; whether this income falls in the domain of Riba? Economists, particularly the majority of religious scholars consider bank interest as Riba and as such forbidden.

It is unfortunate that, on the hypothesis that interest and riba are synonymous terms, the real task has been put aside and all efforts have been directed towards introducing alternative methods based on tricks long ago rendered obsolete. The energies and capabilities that should have been spent on important matters are being wasted on trivial things. Had the entire struggle been meant to achieve the objectives that, according to scholars, are laid down by Islam, it has failed miserably.

Whether in the field of economics or other faculties of social studies, words and terminologies and technical intricacies have their own importance—realities are more significant, yet hard. You may give a rose any name you like; it will remain a rose. So it is mere wishful thinking to hope that we can bring about economic and social revolution by changing the name ‘bank interest’ and assigning the same task to bai murabaha (trade between buyer and seller) or ijara (rent) or any other Arabic label. The notion of a welfare state is an Islamic concept, but is it not the reality that the welfare states in Europe are making a mockery of Islam in relation to bank interest? Islamic scholars fail to understand how this could be relevant in the context of interest. We have been so deeply engrossed, and still are, in words and terminologies that we have lost sight of reality, and the terminologies remained suspended in the air and failed to have a practical effect. Those who believe in actions and not words have eliminated economic and social inequality by providing a glimpse of Islamic laws despite the presence of interest; the irony is that we are happy with the introduction of the Arabic labels.

It should have been our focus to make deliberate efforts to exterminate riba and promote charities as a substitute in our society to help poor and destitute people. However, this did not happen. Scholars wrongly mistook bai (trade) for an antonym of riba and started proposing different forms of financing that act just like interest because it was mistaken for a synonym of riba.

Extremely pedantic experts, religious scholars and economists alike, continued for decades with their analytical dissection of the definition of riba. In Pakistan, the case of riba, which had been shelved for about twelve years, suddenly came to the surface, inviting combatants to lock their horns again in the arena of religious and anti-religious jargon. Not surprisingly, the nation will hear the same repetitive and circular reasoning leading it nowhere, plunging it again into an intellectual vacuum.

The government authorities, who are conscious of the importance of interest, simply do not know how to tackle these arguments. The result is obvious: stalling the main issue instead of coping with it has been the main tactic of government and financial institutions. Religious scholars, Muslim economists and a few columnists who consider bank interest as riba have invested too much in this view to rethink their theories. This situation demands a daring venture from a non-partisan thinker who could address these conflicting issues of the Muslim world.

Some of the scholars were of the same opinion that commercial interest cannot be categorized under riba. However the approach and reasons put forward by them is not free from errors. For example A renowned scholarly personality in Pakistan is Fazlur Rehman, who, referring to the Holy Qur’an in support of his argument, says that verse 130 of Surah Aale Imran has a central role in al-riba issue, in which doubled and re-doubled, that is, a multiplied increase on a loan is prohibited.  According to him, this is the prohibition of al-riba, but since it was linked to a system, the prohibition is general in nature and there is no exception. However, he says, it is incorrect to draw the conclusion that bank interest is also prohibited in a similar way because it is linked to another system at present. Although Rehman claims that his definition is derived from the Holy Qur’an, if we look carefully at the verse, we will know about one of its characteristics, not about its definition. Perhaps this is why Abul Kalam Azad has translated this verse as: ‘O Muslims don’t fill your stomachs with riba earning, in which (real loan money) is doubled and multiplied.’ Such additional sentences are used to explain the seriousness of the issue, and to expose its ugliness. ‘Doubled and re-doubled’ cannot be construed as the cause of prohibition of al-riba in the verse in question.

He, while defining al-riba, uses the following words: ‘Riba is an exorbitant increment.’ But what does this ‘exorbitant’ mean?  It is a relative term and no standard is left if we rely on this definition. Moreover, what about the real question of deriving the definition from the Holy Qur’an? What is the exorbitant limit of al-riba set by the Holy Qur’an? One per cent, 10 per cent or what? In view of these arguments, we say that his definition or interpretation is not only in contradiction with the Holy Qur’an, but is also unsatisfactory.

Another scholar’s definition needs to be analysed. This is, in fact, another view, based on negative grounds. This view is held by Syed Yaqoob Shah, once Auditor General of Pakistan. According to this school of thought, in Arab, there was nothing like ‘trade’ or ‘productive loans’ before Islam. The word al-riba was used with meanings that were prevalent among Arabs. This hypothesis has a major significance in our discussion.

To say that there was no trend of loans for business purposes may be the result of unavailability of historical evidence. On this negative basis, any final definition of al-riba is a difficult task. That is why Shah admits this fact and seems to be complaining that our historians and those working on the Hadith did not compile details on different forms of loan prevalent before Islam, due to which we find it difficult to say with authority what meaning the word al-riba had during the revelation of the Holy Qur’an. He himself said that our historians have made detailed mention of the period of our Holy Prophet ﷺ. They did not ignore any issue, no matter how small, particularly when it has a linkage with religion. Countless books of Hadiths and interpretation of the Holy Qur’an are witness to the fact, but there is no mention of productive loan, even in such voluminous stockpiles.

Now the entire debate revolves, according to Shah, around the uncertainty about whether trade loans were prevalent among Arabs before Islam. On the contrary, religious scholars, Muslim economists and some orientalists produced many historical evidences that trade and productive loans were as prevalent in those days as they are today.

Shah’s approach is certainly not based on established facts, and it is generally recognized that laying any foundation negatively is not trustworthy, according to scholars of the relevant field. However, there is another aspect that is very interesting. It is strange enough that Shah considers trade loans as productive and those on agriculture as non-productive loans. We think that these loans (agriculture, industry and art) are as productive as they are in trade sector.

This is a very weak aspect of his theory through which he wants to detach bank interest from al-riba, but its weakness of argument remains a hindrance. Although he has arrived at an accurate conclusion, he could not provide any strong evidence from the Holy Qur’an in support of his arguments; neither could he introduce any definition of al-riba in a positive way. As a result, his entire theory failed to receive acceptance in the literary world, even though he was half correct. The difference between consumption loans and productive loans cannot be proven from the Holy Qur’an and Sunnah.

Contrary to these scholars’ reasoning, this book takes a different position basing on the context of Qur’an and reached the conclusion that riba is not mere the excess on any loan, rather it is excess on the loans extended to the destitute and needy persons. Bank’s interest is completely different from the Qur’anic riba which is prohibited. It represents a complete paradigm shift from the orthodox and popular view of bank interest. It establishes why bank interest cannot be categorized under riba, which is fervently outlawed and condemned by the Holy Qur’an.

The way Mr Anwar Abbasi made bank interest the topic of discussion through basic sources of Islam and various definitions and interpretations, and took courage to differ from popular viewpoints in a purely academic way is really appreciable.

This type of book can be written only on the basis of a combination of practical experience of a professional banker and purely academic and research-oriented studies.

Such work, done with untiring effort, sincerity and scholarly integrity, meets the most important need of the times.

Anwar Abbasi’s book Bank Interest and Islam: An analytical and critical study is an important addition to the subject in terms of both scholarship and research. This book should serve as an eye-opener for people like us who consider the present forms of ‘Islamic’ banking as a reflection of values of the Islamic justice system and social equity. Abbasi’s arguments are solid, his narrations logical and his way of writing is so clear that an ordinary educated man who is not an economist can understand them.

This book, while demonstrating courageous research, contains basic discussions on various aspects of the definition of riba, which is of great significance and will have far-reaching effects.

1 review for Bank Interest and Islam

Muslim Women Writers of the Subcontinent

A Documentary History of Islamic Education